Before I had my second baby (Ire) I was legit unserious and borderline disrespectful of all forms of contraceptives until they taught me a lesson in form of baby Number 2 who I totally adore by the way but the timing wasn’t just pure at all but we thank the Lord. Once I had my second baby people (Nigerians) didn’t seem to understand that after just having pushed a watermelon out of my bum bum I won’t want to be back to the labour room any time soon, but as we have no chill in most of my congratulatory messages they would always be an “oh we will expect the girl soon” and in my mind, i’m like y’all most be high on some expensive crack for real, how much of the school fees are you willing to pay?

I remember some guy actually prayed for me to have twins no joke. So even though I have a serious fear for people/ drs/humans any one putting anything up my special place I went to see the Dr about getting an IUD because the fear of school fees is the beginning of all sorts of wisdom.

Why a Copper IUD?
I had done some research after I had Kunms on different types of contraceptives and I had decided I don’t want anything with hormones in it because lets face it hormones are scary and seeing as I am already crazy and emotional and dramatic 25hrs in a 24hr day adding hormones to the mix will just make me crazier than Britney Spears that time she went and just cut off all her hair. Plus I hear that you put on weight and I think I have established over and over again that I DO NOT need more JUNK in my TRUNK. 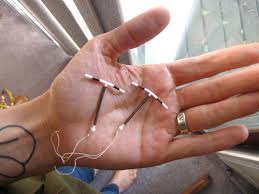 So since I was left with non hormonal methods it was either condoms, copper IUD or close my legs and let the Holy spirit be my comforter. As condoms are long and I don’t want to leave my kids wondering why this ballon is so slimy , I decided I had to open my bumbum and just put the damn thing in.

How it went down
I got back to Nigeria with the baby on Monday and by Friday I was at the Dr for my appointment that is how desperate I was not to have another baby. After all the normal hospital formalities, it was time to get the real business out of the way. The IUD itself is really tiny as small as a paper clip. The Dr used a speculum (That nasty thing they use for pap smears) to keep my cervix open then he inserted the IUD and cut the string. He said he cut it short so it doesn’t disturb sexual intercourse. The whole process took about 30 minutes, it wasn’t painful it was just very uncomfortable for me.

Side effects
I had been breastfeeding exclusively so my period hadn’t come back but the IUD brought it back almost instantly and it was heavy the Dr warned me about that but it was much heavier than I expected like I had to use diapers at a point heavy. 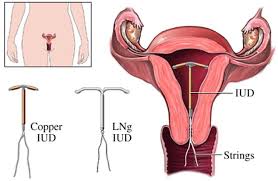 My period has also become irregular so I’m always scared I might be pregnant everyday I don’t see blood. Sometimes I can feel it which is abnormal but I can’t be bothered to go to see the Dr. Sometimes he can feel it too.

Cost
The cost varies depending on where you get it done, but I hear its free at government hospitals but I can tell you it starts from N20,000 if you are getting it done on the Island in Lagos.
Over all I feel good about it because at least I know technically I can’t get pregnant for the next 10yrs.

What types of contraceptives are you guys using and how is it working let me know? If you want to talk to me about anything email me temilola@ftmbaby.com