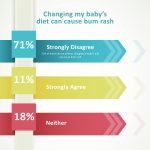 Diaper rash on your little one’s bottom, can be a great source of discomfort making diaper-changing time miserable for both mum and baby.
While there are many possible reasons why your little one may experience diaper rash, a new survey has revealed that most mums do not know the possible causes of diaper rash.
Diaper rash accounts for 20% of dermatology consultations in childhood, but its causes are poorly understood by mums. It is typical to assume that because the name is ‘diaper rash’ and found in the buttocks, it’s only caused by the diaper.
Why most of the mum’s response showed that they understand the benefits of protecting their baby from diaper rash, they do not understand that the rash can break out on a baby’s skin because of many reasons.
Three quarters of mums believe that only baby’s diapers can cause rash on their baby’s bottoms. They do not realise that other factors such as allergies, diets, infection and drugs can affect the baby’s skin.
The Diaper area is prone to bacterial and fungal infections,because it is usually warm and moist.
The survey reported that 71% of mums do not believe changing of baby’s diet can cause diaper rash. However, one of the most common causes of diaper rash in babies from around 4-6 months onwards is the introduction of new foods….and certain foods in particular.
According to Dr . Ronke Akinola, a pediatrician, when your baby starts solid foods for the first time, the texture and composition of his stools changes. So may the frequency with which he passes them. These factors alone can trigger a rash in some babies.
So, if your little one is suffering from a diaper rash – then it’s time to take a look at his diet and the way it is prepared.
It is important to note that with the advancement in technology today, using a diaper with in-built lotion can be immensely beneficial to a baby’s skin as it helps keep the dryness. This also ensures that proper attention towards the main causes of skin issues are done outside assumptions.
It is best to visit a pediatrician once skin irritations are noticed on a baby, particularly if it lasts more than two days.
The research was a random online survey of mums whose babies fall between the ages of 0 – 12 months.